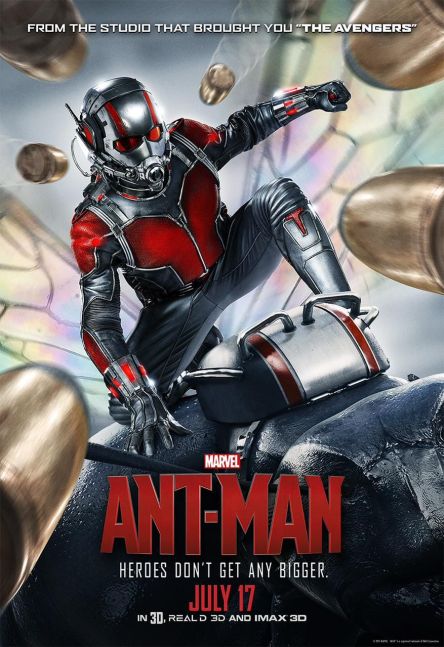 I recently went to see Antman at the cinema with a couple of friends. First and foremost, it was a film I wanted to see purely because it’s Marvel and secondly because I absolutely love superhero movies.

I didn’t really know what to expect from the film since many of the newer marvel films, and those to come, are more and more intense and are starting to lead into bigger plotlines; therefore leaving origin stories behind. Antman takes a different course in all of this and we are allowed to see a brand new origin story of a lesser known comic-book character.

Antman is a character that can be easily mocked; named after an Ant, of all creatures, and with the super power of being able to shrink really small is cause for laughter, but I think this very interesting and highly scientific concept is innovative and a nice change of pace while in the middle of all the other larger Marvel films.

Like all films, it seems, Antman has all the regular properties, such as, action, comedy, heartache, crazy cinematics, drama and a romantic interest. While the romance was probably expected, it was a nice addition to an eventual happy ending.

The cast was excellent, Paul Rudd, playing the lead Scott Lang, was fantastic and played the role perfectly. Other members of the cast include; Michael Douglas as Dr. Hank Pym, Evangeline Lilly as Hope van Dyne, Corey Stoll as Darren Cross, Judy Greer as Maggie Lang, Anthony Mackie as Sam Wilson and many more.

With the innovation of a new character comes a great example of today’s cinematic age; film quality is rising to new heights. There are fantastic scenes with a shrunken Antman in a world of large furniture and an incredible fight scene which takes place between Antman and a villain of a similar size showing a hefty battle around a children’s train set, and yet, the film doesn’t disguise the hilarity of this with anti-climatic cutaways showing nothing more than a toy train falling off of its tracks. Additionally, the CGI Ants create amazing scenes too, especially when Scott Lang’s right-hand ‘man’ is a flying Ant called Antony.

To give you more info on the film, here is the IMDB synopsis: ‘Armed with the astonishing ability to shrink in scale but increase in strength, con-man Scott Lang must embrace his inner-hero and help his mentor, Dr. Hank Pym, protect the secret behind his spectacular Ant-Man suit from a new generation of towering threats. Against seemingly insurmountable obstacles, Pym and Lang must plan and pull off a heist that will save the world’.

Finally, as with all Marvel films, there was an after-credits scene. While I said that Antman was taking a different course to the main action within The Avengers, the after-credits scene reveals that this is only short-lived as Antman is tied back into the main plotline with a hint to his role in Civil War.

Disclaimer – I do not own the above image, it is from: http://www.superherohype.com/news/342923-its-all-connected-in-the-latest-ant-man-tv-spot