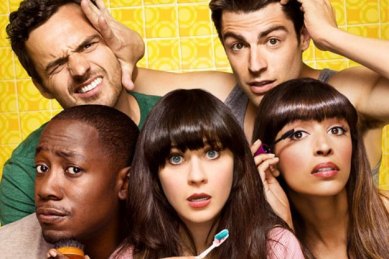 I have been watching New Girl at every free moment I can. I watched it when it first aired and now have Season 1 and 2 on DVD. This show has great characters, great scenarios and a great concept. The concept is that one girl lives in a loft with three guys. Hijinks ensue.

The plot is described as follows (from google+): ‘After going through a rough breakup, awkward and upbeat Jess moves in with three single guys. Intelligent and witty Nick is an underachiever who took the bartender off-ramp on his road to success. Schmidt obsesses over his social standing and looks at Jess as a personal project. Winston is a competitive former athlete who, after realizing he will never become a pro, moves into the loft. Together with Jess’ best friend, Cece, they bond to form an unlikely, and dysfunctional, family.’

The show is so loveable because of these four people who live together and because each episode allows us to see their relationships develop and grow both with each other and with outside characters. Part of this comes from excellent actors such as; Zooey Deschanel, Jake Johnson, Hannah Simone, Lamorne Morris and Damon Wayans Jr.

I am so obsessed, once again, with this show and I’m sad because I’m not watching the show right now!